Aren’t You Getting A Little Too Old For Roller Coasters?

Aren’t you getting a little too old to be riding on a roller coaster?

I don’t mean the roller coasters at the amusement park.

I’m talking about a different kind of up-and-down ride.

It’s the ride you’ve been on for a while now, even though you don’t like it.

It’s the ride where the downs come with a hangover, regret, shame, and sometimes arguments with the spouse.

It’s the up-and-down life you get from not having control of your drinking.

When you’re at the bottom of the hill, things are pretty rough.

Sometimes they are so rough you begin looking for a way to get off the ride.

At first, you make promises to cut back or quit drinking.

And you try using willpower to take control because that’s all you know.

Maybe it works long enough for the drinking to slow down or stop for a little while.

So the hangovers go away, and the spouse is happy.

The view from up here at the top of the hill is great.

But it doesn’t last.

Before long, you’re dropping straight down the other side at an alarming speed.

Right to the bottom and more hangovers, arguments, regret, and shame.

What else is there?

So you check that out.

Maybe just online, or you actually go to some meetings.

It’s wrapped differently, but aren’t they just using willpower too?

(Side note: If AA works for you, please keep going.)

And things are looking okay again.

The spouse is happy.

It’s been a while since you were hungover.

This seems like a good time to give myself a “reward.”

Straight down to the bottom again. 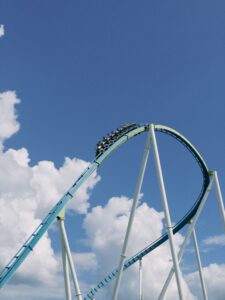 Photo by Skyler Gerald on Unsplash

I see this all the time.

In fact, I had season passes to this amusement park for over 30 years.

When you’re down, you’re looking for a way out.

The problem most of us deal with is the down doesn’t last long enough for us to really follow through and solve the problem permanently.

We can go up and down for years or even decades.

We get into such a bad place that maybe it isn’t just the wife that’s noticing how bad off we are.

Maybe your friends, the people at work, or your kids notice too.

Your new low has taken you lower than you’ve ever been before.

You want to fix the problem.

And maybe you even try something new.

But it’s the same thing all over again.

You don’t actually follow through and solve the problem.

Things level off a little.

And you know the drill. 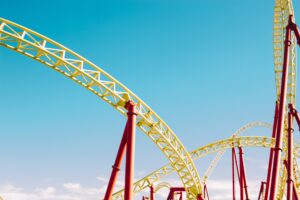 Photo by Olga Nayda on Unsplash

As long as there’s some temporary positive movement up or even sideways, you don’t follow through.

You never solve the problem.

You just keep repeating the same pattern over and over again.

I know you’re tired and want to get off this roller coaster.

I almost gave up completely.

But I finally found a different way to take control.

It doesn’t rely on willpower.

It is super easy.

And it works right away.

Don’t wait for another low.

And if you’re already there, follow through and end it.

Go to choosenewthoughts.com/video and check out the video training and discover what you need to do to take complete control of your drinking right now, today.

You can take control.

Check out the free training at choosenewthoughts.com/video and find out how.